If you think that e-commerce portals are a threat to stores across the country, try this simple test on any e-commerce site. Put in a small town pin code or a village pin code and you’ll see that the delivery dates shoot up dramatically.

It is a physical problem. India Post has the widest network in the world – nearly 155,000 physical locations across India. But a significant percentage of the post offices are not connected by a technology backbone. From an Inc42, report, the Indian retail majors - Amazon has 67 fulfilment centres and Flipkart has 21- all built within the last five years. Business Standard reports that, together they have a total warehousing capacity of nearly 1.5 million square feet. For a country of India’s size that’s a drop in the ocean.

Fulfilment centres build capacity to service orders – and they have to deliver to millions of addresses which comprise the last mile. That’s where the problem really comes in.

Take one of India’s top food delivery companies, Swiggy. It operates only in 10 cities in India. That’s mainly the metros. Swiggy is an example of last mile delivery of cooked food. And the Swiggy network does not deliver to the suburbs beyond these cities. That last mile is still to be bridged.

This was the problem that Kochat Narendran has grappled with in a career spanning over 3 decades in logistics. Working at some of India’s best known names like DHL, Thomas Cook, DTDC and Yusen Logistics, Narendran saw the problem from a very different angle.

He understood that e-commerce portals had managed to exponentially increase the number of goods available for ordering. Delivery would be another ball game altogether. No matter how much aggregation capacity was built, bridging the last mile would be the most expensive part of any delivery supply chain. 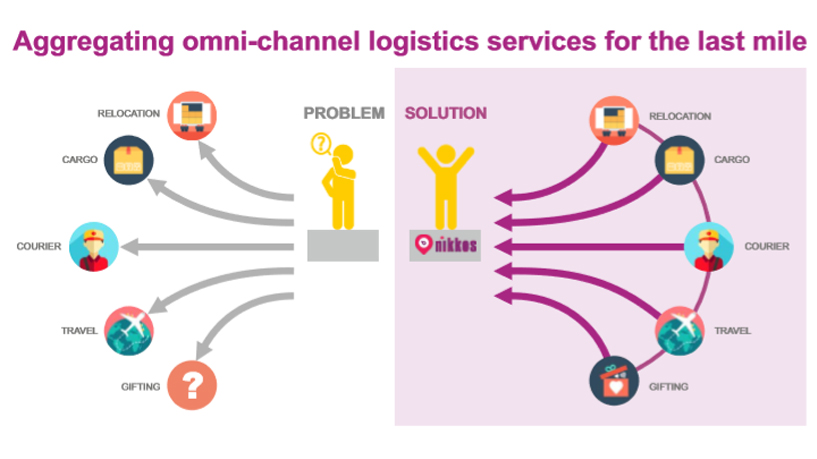 He had mentored two enthusiastic youngsters at a premier express company – Anubhav and Dhawal. They initiated a project to supply cakes and other gift items across India. Setting up a website to take orders was the easy part. The real problem was to ensure that the cakes reached within a certain number of days without being spoiled or crushed. Initially, they restricted delivery to just 4 metros. In time that was expanded to Tier 2 cities as they built up a chain of supply partners.

The experiment kindled a fresh business idea a couple of years later – that an omni channel retail store in logistics would be a viable proposition. With the personal network and the credibility he had built, he approached Amrita TBI for Incubation with the idea and it was approved in a matter of weeks. He tied up with global majors in logistics, relocation companies, cargo providers, freight forwarders, transporters and courier companies – all under one roof. The first physical store of Nikkos was started in Bangalore in 2015. It broke even a year later even though it was set up in a predominantly residential area.

In 2017, the stores in Coimbatore and Jaipur were opened and the turnover has been encouraging. Enquiries have come in for everything from local deliveries to be made for the e-commerce majors to relocation requests, to food from native food items.

The biggest advantage the Nikkos stores have is that they can aggregate orders and physically deliver to every location within a five kilometre radius. This greatly increases the reach for e-commerce companies and helps households or businesses to have a bouquet of services available to them within easy reach

Nikkos is primed for rapid expansion and to extend the last mile for a host of e-commerce companies to reach their prospects. This is just the beginning of a long and exciting journey ahead.